09 Jun Out With the Old…in With the Brew

Justin Rizza, Head Brewer
BACK TO ALL ARTICLES

This has been one undeniably rainy spring season in Central Texas. As some stand fretfully by, frequently checking their cell phones for the current forecast and dreading the thought of floods and tornados that may befall the area, others rejoice as the fresh water hydrates our drought-stricken soil, fills our lakes and paints the landscape.

Late last month, the skies threatened yet again on a soggy Wednesday, but decided to hold back (just for us I like to think) for the better part of the day while some critically important work was completed at our Round Rock Flix Brewhouse. Here at our flagship store, large windows were removed and framing was disassembled as riggers carefully piloted a high capacity forklift, lifting large, automobile-sized pieces of neatly wrapped equipment (as if they were birthday presents for some kind of mythological giant), off the tail-end of a 48-foot flatbed trailer that had just arrived. All that was missing was a bow neatly tied on top. That fabled behemoth would have been happy indeed upon tearing open the wrapping on a brand new 7-barrel brewing system, shipped directly from Slovenia.

As we approach our 5-year anniversary, we revel in a doubling of our brewing capacity and this with much more sophisticated controls. As our trusty old 3.5 bbl system was plucked through the same new window opening and placed on the back of a flatbed truck destined for new adventures in brewing in a land far away called California, I was overcome by a rapid fire, sentimental, flip-book style storyboard covering the last five years in my career.   From replacing every gasket, butterfly valve seat and fuse to lovingly trying to rescue both the exterior cladding and the internal brewing surfaces from their lamentable state of neglect in order to get some respectable beer made, I’ve had my hands on that brewhouse more days than not since July 2011. Free of any bells or whistles, the old brewhouse, along with its compatible fermenters and serving tanks, was the workhorse that allowed me to create the entire Flix Brewhouse beer program from scratch. I’m really going to cherish my memories working with that little brewhouse and I could not resist the urge to grab brewer Carlo Garcia so we could toast the little gem with some Round Rocker Lager as the flatbed driver was starting up the engine to roll away with it forever. 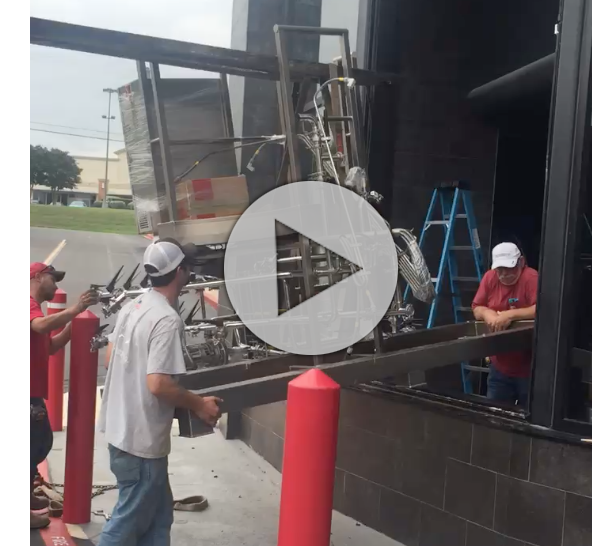 Luckily I had this gorgeous new brewhouse and some new, super shiny beer tanks to brighten me right back up. This new brewhouse is identical to facilities we have built in Des Moines and Carmel, as well as the one that has been built for our soon-to-open Albuquerque, New Mexico store. This addition paired with our new 15 bbl fermentor and two new 15 bbl serving tanks will allow us to increase our capacity to 1,600 barrels a year while dramatically cutting the labor involved to do so. Perhaps most importantly, it will remove the need to brew back-to-back over a two-day period to fill each fermenter, which will both speed up the entire brewing process and result in a cleaner, more “repeatable” product. The bells and whistles are nice too! Temperature sensors, flow meters and variable frequency drive motors definitely will be most useful in our effort to masterfully maintain consistency in our processes.

Last week, as the big expansion day came to a close, equipment was pallet jacked and nudged into final resting places, crates and pallets were stacked up and hauled away, the crew sat for a couple of well-deserved and freshly brewed Flix beers at our bar. As if we were being watched from above, just as the front windows of our brewhouse were sealed back into place, encasing our proud workspace and our new showpiece apparatus …it started to rain.  A good omen indeed.