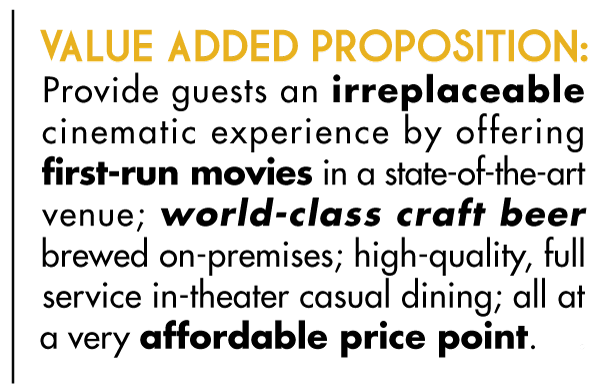 While domestic box office gross dollars continue to slowly grow, since the advent of stadium seating and surround sound in the early 1990s there has been little innovation in the typical cinematic guest experience. Digital projection, which has hugely impacted the efficiency of distributing films, has only incrementally improved the guest viewing experience and the current evolutionary stage of 3D cinema continues to be rejected by many consumers. The nascent cinema-eatery concept is the first major guest impact game-changer since stadium seating. Established major movie theater circuits have attempted to break into this sub-market of the cinema industry by retrofitting theaters, with often tepid results. Other newer operators have designed cinema-eatery concepts that are being expanded presently – many with very favorable results. None, however, have combined the excitement of a brewpub (featuring exceptional craft beer brewed on-premises) with the cinema-eatery concept, all offered at a comparatively value oriented price. This is the essence of Flix Brewhouse.