Chad Borges, Manager of Content and Production
BACK TO ALL ARTICLES

I love an example of an excellent misquotation. The more widely (mis)used, the better, as it relates how distorted and twisted the original idiom has become from what it may have previously represented. My favorite example of this quirk of human behavior is: “A jack of all trades is a master of none.” But this is not the full quotation.  The original quotation is:

In the age of digital media, the complete essence of this age-old saying must be taken to heart by those of us who are marketing content professionals. It’s not about a particular tool or system, but rather being curious about other possibilities as the tools we will use over the next two or three years will inevitably be entirely different from those we used two years ago. Times change quickly, but in the world of digital content, the pace is accelerated exponentially.

In our fast-moving digital world, EVERYTHING is a moving target when it comes to connecting with consumers.   In a world with camera phones loaded with hundreds or thousands of memories in the form of pictures, video, tweets, snapchat stories and/or face swaps, how can one hope to make an impact, or create insights and connections that are useful marketing tools when it all changes so fast?

Where marketing hasn’t seemed to change in our overwhelmingly digital age is with brands that tend to easily build consumer loyalty through an emotional connection. It is less about knowing the specific avenue through with which to connect to people (as that will always change), but rather how we can engage them in the moment in way that is both relevant and sharable, in service of the brand.

Take, for example, having a fantastic custom back-drop featuring the latest superheroes from the latest blockbuster for our guests to pose in front of during their latest Flix Brewhouse adventure. Those elements might create a fun memory for a guest during their time with us, but it’ll likely sit as another one of a million cellphone selfies. As a brand, we can’t do much with that as a standalone. So what if we were to break from the norm by taking the photo process back from everyone’s cellphones, made it more fun and really easy to share. Enter the “Flix Brewhouse Fantastic Foto-to-Go Box or (”F-BFF” in the world of the Millennial). 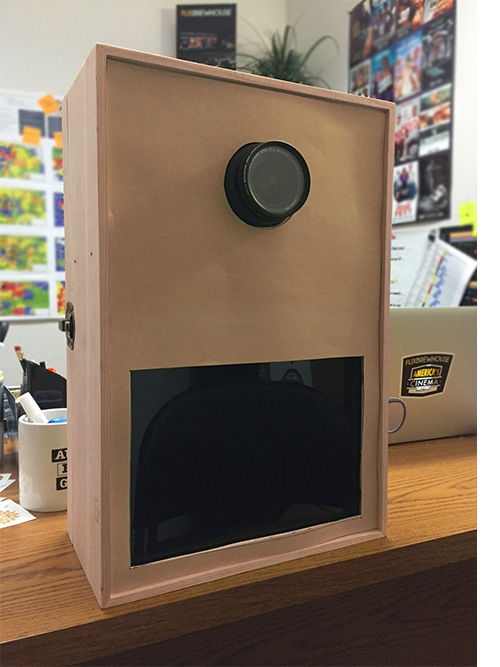 Scheduled to be revealed later this summer, currently this non-descript 2.5’ x 1.5’ wooden box contains an HD camera as well as a tablet built and mounted inside. All a guest sees externally however is a touch screen mounted below a lens.   Using software on the tablet, a guest can click the image displayed on screen, pose, and after a brief countdown the F-BFF will snap a photo, superheroes and all. After it’s taken, the guest can input their phone number and the app on the tablet will automatically send the image to the recipient via text messaging. Cool right?

You may ask how is this photo different from the one the guest might have taken with their own phone or camera. The devil is in the details, as the photo box can display any sort of movie title graphic, frame, or even social media hashtag we desire on every photo it takes.   Now that photo of you and Spiderman during the Captain America: Civil War premier at Flix Brewhouse actually has the branding displayed along WITH it and is connected to the hashtag the marketing team sets. Now, rather than dozens of disconnected personal photos floating around the social media ether, the result is consistently branded imagery, representing and connected to Flix Brewhouse that is easily obtained and sharable by all participants. We’ve created a means to capture the memory of joy and fun we bring to those who walk through our doors, that we can also manipulate, track and utilize as a rather impactful marketing tool.

The best part of this example is that it is merely the “Beta” unit; a system devised, planned and prototyped in the course of a single afternoon thanks to the creativity, dexterity and discipline of our “marketeers.”   Thus, our biggest and most exciting challenge collectively as a marketing team, is not how we remain at or near the cutting edge of technology, but rather how we fit into this fast-evolving, new-world-marketing matrix that we live in and how it is that we are going to continue to delight our guests in a way that is both relevant and unexpected.