Pulling Out All The Ops Stops

26 Dec Pulling Out All The Ops Stops

By: Mark McLaughlin, Vice President Operations Support
BACK TO ALL ARTICLES

Just a few short weeks ago, we took the combined efforts of the last 11 months and some truly exceptional and highly motivated managers fresh out of training and descended upon the high desert with a mission. The unit level team led by Mike Aguirre and the training team led by Lindsey Moon-Lenggenhager, our Senior Manager of Learning and Development, welcomed 180 new team members for the opening of our Albuquerque Flix Brewhouse. 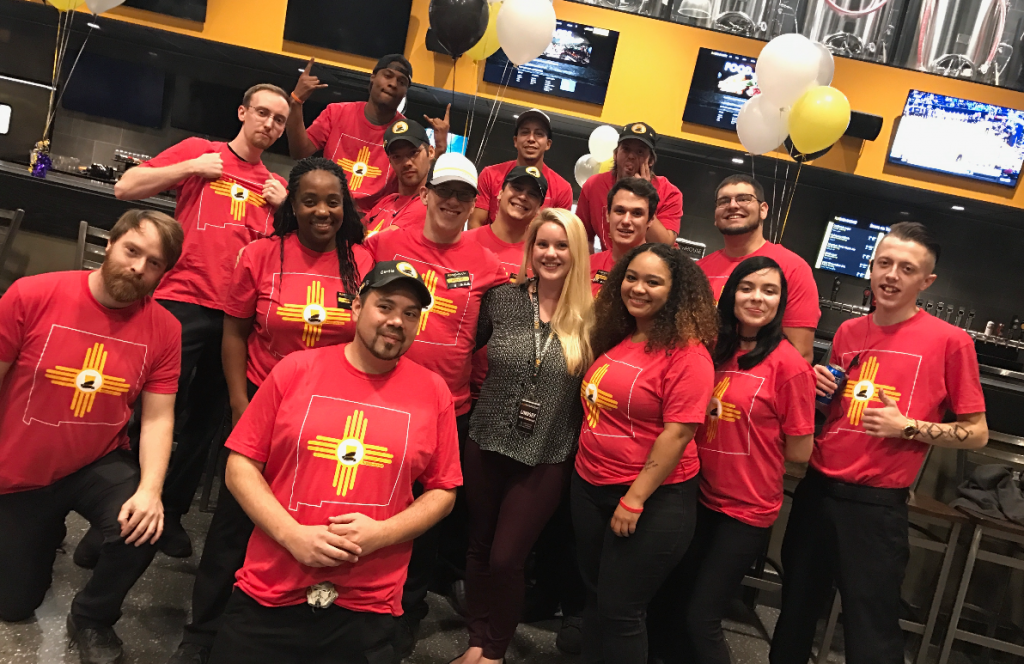 Five days of intense block training, two nights of live fire food and beverage rotations and we were ready to receive the first paying New Mexicans passing through the doors at Flix. The opening of our beautiful new unit could not have been a bigger success. The latest in the Harry Potter story arc, Fantastic Beasts and Where to Find Them, might have drawn them in, but all left with a sense of “wow” upon experiencing the totality of what the entire Flix Brewhouse team brought to Albuquerque — a gorgeous facility, top notch food and beverage, amazing people delivering incredible service and Flix-brewed beer that has already become the buzz of this tap room crazy town. Twelve 5-star Yelp reviews right out of the gate is unheard of and when combined with nearly 100 top scores on Facebook, it’s clear we hit the mark in the first two weeks in the Albuquerque market.

As 2016 ends, we embrace the holiday spirit and along with that comes time for both reflection and celebration. Looking back on the year that was in our Flix universe, those feelings abound as we assess where we are now in the Operations and Learning Departments relative to where we started the year. The milestones we’ve achieved in just one year are truly noteworthy.

We set out in January 2016 with a lofty goal of putting Flix on a course for growth and future success by revamping our entire service delivery modality (Flix 2.0 as reported in our Q1 2016 Newsletter). This was supported by the development of a university-style training program designed to empower team members to deliver on our Gold Standard promise. There were pockets of resistance to change, so we adopted an aggressive approach starting with our leaders. With dynamic backgrounds and eagerness to build a brand, talented new hires melded with the existing team to collaborate and develop an extensive and relevant learning and development program. Our nascent Manager in Training (MIT) program enrolled its first student in March, Round Rock’s then new general manager Scott Hubener. Scott quickly excelled and provided substantial feedback that allowed us to vet the program for the rush of talent we added going into the autumn of 2016. The Round Rock store became the seat of Flix University.

The MIT program graduated 12 new leaders in 2016, including our two newest unit general managers. Graduates are represented in every Flix location. All have achieved significant on-the-job success, much of which goes far beyond the content that was created and extends to the leadership and character of those who taught the curriculum and then personally delivered effective on-the-job coaching. In particular, Scott and Lindsey spent endless hours taking Flix 2.0 from textbook theory to reality. The culture and camaraderie their efforts produced has positioned our organization for an amazing 2017.

In addition to our MIT program, Lindsey worked tirelessly alongside longtime Round Rock team members and created a program that now exceeds 60 digital courses and provides a detailed Flix 2.0 training compendium that takes a new team member from day one at Flix, all the way to management. Along the way, team members learn every facet of our operation. Using the building blocks of our Flix instructional mantra, “Teach, Show, Do, Review,” team members build foundations that allow them to advance at whatever pace their skillset allows. Year-to-date, we have now trained over 300 new team members in the Flix 2.0 program. Their assimilation into the ranks of Flix team members has materially and positively altered our sales trajectory and substantially improved guest satisfaction metrics across the Flix Brewhouse circuit.

We also introduced an achievement based compensation (“ABC”) program that offers today’s millennial workforce the opportunity for self-directed financial gain and career growth outside the bounds of yearly reviews and perfunctory pay increases.   Think merit badges with pay increases. ABC combines academic learning and on-the-job training with continuing performance validation. With ABC, team members now have an objective program that they can control that earns them compensation increases and recognition awards. Our goal in 2017 is to have every Flix team member participating in the ABC program at some level.

Our Pin Program has also created an amazing buzz within the Flix universe and gives our leaders an opportunity to recognize behaviors that embody our Flix Core Values. These pins span a wide variety of recognitions from Team Member of the Month, Trainer, to New Store Opening Crew and beyond. Where we’ve seen the program really take hold is in how proudly our team members display their pins, helping them tell their Flix story as they recount the places they’ve been around the circuit or the things they’ve accomplished.

The culture of any organization is what truly defines it in the eyes of its people. Katie Baker, our Indiana-based Manager of Talent Acquisition and Cultural Enrichment, helped deliver some amazing programs to enhance our team member experience and set us on course to be an employer of choice for years to come. Under Katie’s guidance, recruiting at Flix took a significant step forward and throughout the course of 2016 we added amazing talent to the Flix family. Three new GM’s, three new AGM’s, two new KM’s and an entire management team in Albuquerque were significant steps in allowing us to push the brand forward and solidify our operations as the year progressed.

Flix 2.0 was only a vision twelve months ago. Now the reality of empowering people and giving them the tools to do their jobs effectively is bearing fruit throughout the organization. All our legacy locations are positive in year-over-year sales and profitability and Albuquerque has exceeded all expectations. Although we’re geographically diverse, there’s now a single Flix culture bred from shared experiences, a core ideology and a uniform curriculum and operating modality. The future is bright indeed as we now have the foundation and leadership needed to attack 2017 and beyond with vigor. As we expand the Flix brand, rid the world of bad beer and create and share happiness both within our work family and among the masses of Flix Brewhouse guests, I’d like to extend a heartfelt thanks to everyone who supported this year’s initiatives. Together we look forward to an incredible new year!